Savitri's milestone in her career? 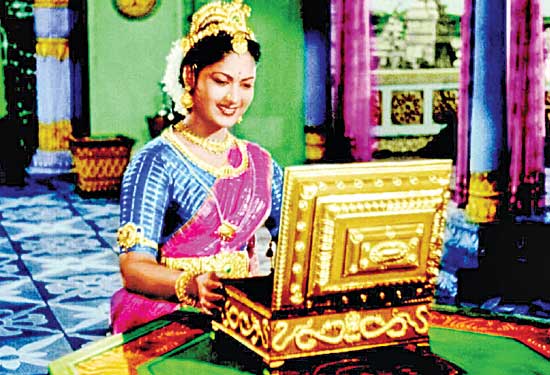 A. Reading: Rendezvous with Ray
I.  Read the following passage.  (10 Marks)
It was a unique friendship that developed between a French - Canadian priest and one of the world's greatest film directors, and had a singular impact on Bengali films both academically and practically. It was enroute to India in 1961, at a stopover in NewYork, that 26 year old Fr. Gaston Roberge was acquainted with the works of Satyajit Ray through the Apu Trilogy. He found the world of Apu so fascinating that he saw all three films in one sitting; and there began his longstanding love affair with the people of India and Bengali cinema and culture, which led to path-breaking work in those fields. In his latest book, Satyajit Ray, Essays: 1970 - 2005, a compilation of his essays as the name suggests, being published by manohar publishers, New Delhi, Roberge provides a scholarly, original analysis of Ray's works, giving an insight into the greatness of Ray both as a person and as an artist.
'The Apu Trilogy was, in fact, my first portal to West Bengal and its people', he told frontline. In his youth, all he knew of Bengal was through Mircea Eliade's La Nuit Bengalie, some of Tagore's poems, and a Reader's Digest article on Mother Teresa. If the harsh image of poverty brought out by the article on the 'saint of the slums' haunted him, Apu's world came as a reassurance. 'No, Apu, Sarbajaya, even Harihar did not need my help-but how not to love them? I thought it was fortunate that I would soon be among them', he wrote.
(Q.No. 1-4): Now answer the following questions. Each question has four choices. Choose the correct answer and write A, B, C or D in your answer booklet.
1. Who is the 'saint of slums' mentioned in the passage.
A) Mother Teresa B) Satyajit Ray
C) Gaston Roberge D) Rabindranath Tagore
2. ........... his long standing love affair : Who is the lover? and who is loved?
A) Ray and Roberge
B) Tagore and Roberge
C) Roberge and people of India
D) Roberge and people of Canada
3. '.......... Which led to path breaking work in these fields', path breaking means?
A) difficult  B) interesting
C) creative   D) unfamiliar
4. What does the expression 'enroute' mean?
A) in the way   B) on the way
C) very near   D) very far
(Q.No: 5 - 7): Answer the following questions in two or three sentences.
5. How was Roberge acquainted with the works of Ray?
6. How did Roberge find the world of Apu?
7. What does Roberge provide to the works of Ray?
Answers: 1-A 2-C 3-C 4-B
5. Roberge was acquainted with works of Ray through the Apu Trilogy.
6. Roberge found that the world of Apu was so fascinating.
7. Roberge provides a scholarly original analysis of Ray's works.

1. In the lesson 'Rendezvous with Ray' Roberge took nine years to meet Ray in person after joining at St.Xavier's college. When they finally met, it was the beginning of a close friendship that lasted 22 years until Ray's death in 1992.
Now write an imaginary interview imagine as a news reporter.
You may use the following ideas:
H Friendship of Roberge and Ray
H Regular activities of Roberge and Ray
H Areas Roberge and Ray worked together
H Future plans etc.
A: Reporter: Good morning sir
Roberge: Good morning
Reporter: How much time did you take to meet Mr Ray?
Roberge: It took nearly nine years to meet him.
Reporter: What made you take such a long time?
Roberge: I didn't want to just go and see him like he was a living museum piece. There should be meaningful conversation with him. so it took a long time.
Reporter: How did you know about Bengal and Satyajith Ray?
Roberge: Through 'Apu Trilogy', I came to know about Bengal and Satyajith Ray.
Reporter: How did you communicate with Ray?
Roberge: In English, Ray knows English well.
Reporter: Did you meet him daily?
Roberge: We meet on sundays at Ray's residence.
Reporter: Why did Ray invite you?
Roberge: He invited me over for private screening of his latest films and welcomed comments on them.
Reporter: How many years lasted your close friendship?
Roberge: 22 years, until Ray's death.
Reporter: What was the important fall out of your friendship?
Roberge: 'Chitrabani' a communication and film institute.
Reporter: What did you say about master director?
Roberge: He had Mastery over all the  branches of knowledge relating to cinema.
Reporter: What are your future plans?
Roberge: Producing important documentaries through 'Chitrabani'
Reporter: Thank you sir.
Roberge: Welcome.
Expected Major Discourse
You have read the lesson 'Rendezvous with Ray'. In that lesson Gaston Roberge described his experience with Ray. You got a chance to meet Mr. Roberge. Now write an imaginary conversation between you and Gaston Roberge with reference to the details of your lesson.

Read the following passage.  (5 M)
The story itself is woven around the love of Sasirekha Abhimanyu. With Krishna and Balarama having difference of opinion over it, their wives too take sides as is inevitable in any family. To introduce the theme, the director uses a magic box, (an equivalent of a TV screen) which displays whatever is dear to the viewer's heart.
Sasirekha naturally sees Abhimanyu and Balarama gets to see his sishya, Duryodhana on it. His wife laps up the sight of an array of jewellery and the audience laughed heartily because they  knew that someone back home was equally attached to the riches.
Now answer the following questions. Each question has four choices. Choose the correct answer and write A, B, C or D in your answer booklet.
1. Whom does Sasirekha see on the screen of the magic box?
A) Abhimanyu    B) Krishna
C) Balarama     D) Duryodhana
2. The gadget used for introducing the theme was
A) a flute     B) a mirror
C) a magic box D) array of jewellery
3. The expression 'laps up' means ....
A) accepting unwillingly
B) accepting readily without hesitation
C) taking something only after the consideration
D) to impress others
Answer the following questions in one or two sentences each.
4. Who had different opinions about Abhimanyu and Sasirekha?
5. What does the word 'inevitable' means?
Answers: 1-A, 2-C, 3-B.
4. Sri Krishna and Balarama had different opinions about Abhimanyu and Sasirekha.
5. The word 'inevitable' means 'certain to happen'.
Major Discourse
1. You read the review of 'Maya Bazar' and also happened to watch movie. Now describe your feelings over the film Maya Bazar.
A: When I read the 'Maya Bazar' lesson, I strongly felt to watch the movie. Fortunately my English teacher showed the movie in our digital class. Then I understood better of the movie. I feel that it is a very good movie and deserved to be voted as the best Indian classic movie. The sterling performances of artists, appropriate expressions, amusing dialogues and reverberating songs. It is a tribute to telugu culture, language and customs of the land. The costumes, photography, music, visual effects and everything are very fantastic. More over it is now in colour. I have the satisfaction of watching an all time hit movie.

Read the following passage.  (5 M)
Savitri gets totally involved in whatever role she plays. 'Chivaraku Migiledi' is one such film. She played the role of a nurse in a psychiatry ward. In a particular scene the nurse has a nervous breakdown and cries uncontrollably. The shot was over. 'Cut', the director said, but Savitri who played the role could not stop crying! Everyone in the set had to run to her and pacify her. The film became a milestone in her career.
Savitri was awarded the title 'Mahanati' (The Supreme artiste). She also received the Presidential award for her performance in 'Chivaraku Migiledi', the magnum opus of Savitri. She was the recipient of 'Kalaimamani' and 'Nadigayar Tilakam' from Tamil film industry. Savitri had nearly 300 films to her credit. Her career was nearly 30 year long. She was equally admired by Telugu and Tamil film lovers. She also acted in a few Kannada and Hindi films. She had a lion's share of films when she was the zenith of her career. Her passion for films was so strong that she directed and produced a few films, in spite of certain adversities.
(Q.No. 1 - 3): Now answer the following questions. Each question has four choices. Choose the correct answer and write A, B, C or D in your answer booklet.
1.  Savitri's role in 'Chivaraku Migiledi'?
A) Nurse B) Doctor C) Patient D) Director
2. The word 'psychiatry' means...
A) the field of medicine that deals with psychological illness
B) the art of acting
C) the field of medicine that deals with heart problems.
D) The art of choreography
3. Savitri's milestone in her career?
A) Ardhangi   B) Chivaraku Migiledi
C) Pathala Bhairavi  D) Missamma
(Q.No. 4 - 5): Answer the following questions in one or two sentences.
4. What was the 'magnum opus' of Savitri?
5. What kind of passion did she have towards films?
Answers: 1-A 2-A 3-B
4. 'Chivaraku Migiledi' was the 'magnum opus' of Savitri.
5. Savitri had a strong passion towards films.