My Mother is an apple of my eye 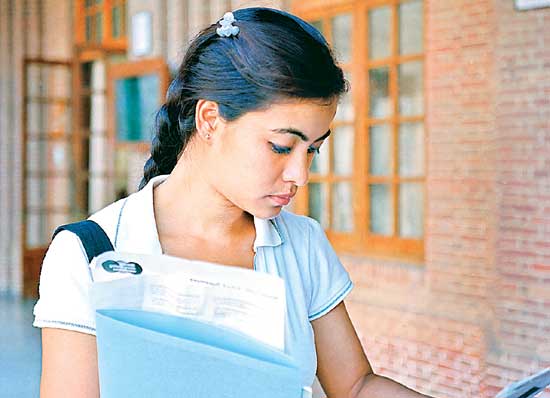 1.    What is an Idiom?
A:    It is a group of words in a fixed order that have a particular meaning that is different from the meaning of each word on its own.
It is a figurative style of expression in  writing and speech. If helps us in real life situations and adds beauty, brevity, clarity etc to language.
Let us see how to use some of the idioms/  phrases in our own sentences.
I. Use any four of the following idioms/ phrases in sentences of your own.

Look at some of the idioms and their usage
1.    A hot potato = controversial and sensitive issue.
A:  a) Indiscipline in that class has become a hot potato.
b) The issue of Jammu & Kashmir is a hot Potato between India and Pakistan.

7.    Acid test = something that shows the true worth of something or someone.
(proves the effectiveness of something).
A:    A teacher can't say anything about a student without acid test.

15. Hit the books = to study, especially for a test
A:    Exams are fast approaching. You need to hit the books.

20. A red letter day = a day when something very important happens
A:    It was a red letter day, when I got first rank in 10th class in the whole of the school.

21. chase rainbows = to waste your time trying to get something that you can not.
A.    An average student should not aim at IIT. It is a chase of rainbows.

23. Grease someone's palm = to give money to an official for an unfair advantage (bribe)
A.    Now-a-days even for a routine service we need to grease the officer's palm.

25. A night owl = Some one who regularly prefers to work late at night
A:    Software professionals are mostly night owls.

26. A square meal = a large, filling, nutrition meal.
A:    Many people work for long hours to get a square meal a day.

27. The lion's share = the largest part of something
A:    My father gave a lion's share of his property to my younger brother.

Note - Making is an art that should be developed by all students as it can make learning easy. One can get success in exams by their own notes. We need to collect necessary facts and ideas, and arrange them properly in our mind so that we can easily prepare our notes whenever required.
'Note - Making' is important because,
a) It actively involves you in the learning process, which is good!
b) It improves your reading skills, vocabulary and note - making skills too.
c) Making notes allows you to reduce information to a manageable size and it is an aid to exam revision.
d) It helps you to think about your subject and also to retain the information.

Points to remember while making - notes:
1) Selecting the salient points
2)    Suggesting an appropriate title.
3)    Present information in a logical sequence.
4)    The notes should be neat, brief, clear and easy to understand and remember.
5)    Complete sentences need not be written: Phrases/ Clauses serve the purpose.
6)    Usually notes may be in the form of numbered points.
7)    Graphs, diagrams, tables may be used wherever necessary.
8)    Shorts forms, abbreviations, symbols etc. may be used whenever possible.

Example - 1                   4 X1 = 4
Read the following passage and make notes:
Newspapers are a form of written publication that contain news, information and advertising, newspapers hold up-to-date information about politics, economics, sports, entertainment, crime, business and society. There are several advantages that newspapers have over other media of information and entertainment. They are reliable and cheap source of information. As the cost of newspapers is negligible, they can be bought even by those who are not well-to-do. Another advantage of newspapers is that they can be read even if one is on the go. It does not require any special effort to carry a newspaper when one is travelling by bus or train. The extreme portability of news papers makes them a popular and convenient source of information. In fact newspapers are specially offered to passengers when they embark on long haul flights.

Newspapers help us to keep abreast of what is happening, not only in our own town or country, but in every nook and corner of the globe. They help in improving language skills. Further, they are a good source of entertainment too. Lakhs of people are avid readers of the cartoons that are published in newspapers daily. The crossword puzzles and mathematical puzzles like sudoku keep one engaged for hours.

A: I) News Papers are a form of publications
II) They contain news, information, advertisements
a) local  b) national c) international news
III) Various advantages
a) affordable
b) can be read even when travelling
c) easy to carry
d) reliable source of information
IV) Offer entertainment
a) cross word puzzles  b) sudoku

Example - 2                   4 X 1 = 4
Read the following passage and make notes.
Amitabh Bachchan is one of the  most well-known celebrities in India and is known worldwide as the most  influential Bollywood actor of all time. He was born Amitabh Harivansh Bachchan on the 11th of October 1942 in Allahabad to the acclaimed poet, Harivanshrai Bachchan, and his wife Teji Bachchan. Amitabh's mother was a home maker while his father enjoyed great success as a poet in the chayavaad movement of literature and was awarded the coveted Padma Bhushan for his contribution to literature of India. Amitabh married fellow actress Jaya Bhaduri, with whom he had appeared in several movies. The couple married on June 3, 1973. At that time, Jaya was highly successful and was, by some counts, more successful than her husband. Shortly after their marriage, the couple starred together in a movie, Abhimaan, and it was a major hit. The couple are together since  40 years, making their liaison one of the most successful marriages in Bollywood.

A:  1. Amitabh Bachchan is one of the most  well known celebrity in Bollywood with Worldwide popularity.
2.    Born on 11-10-1972 in Allahabad to Harivanshrai Bachchan, a successful poet and Padma bhushan awardee and Teji Bachchan, a home maker.
3.    Amitabh married Jaya Bhaduri, a fellow actress on 03-6-1973.
4.    They acted together before and after marriage.
5.    Living together for over 40 years, they made their marriage the most successful in Bollywood. 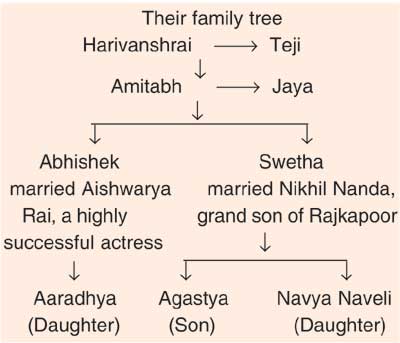